A series is said to be stationary when the statistical properties (importantly mean, variance and auto-correlation from time series forecasting perspective) of the series is time invariant (i.e. don’t vary with the time). In simpler terms, when observed across any regular time intervals they will remain the same.

However, this is a more of an ideal definition which not so quite often occur in real time. Only a flat line or an oscillation would be perfectly stationary. In real life the series will contain periodic fluctuation (seasonality), trend and variance in the data. As can be seen in the below figure, even the stationary series, if observed, against regular time intervals will have a varying mean. So while being referred to series being stationary in time series it is mentioned more in acceptable terms (i.e allowing acceptable amount of variations).

With which series can you estimate the future better?

Given, two sets of images, first set contains the Non-Stationary series and second contains stationarized series for the same. 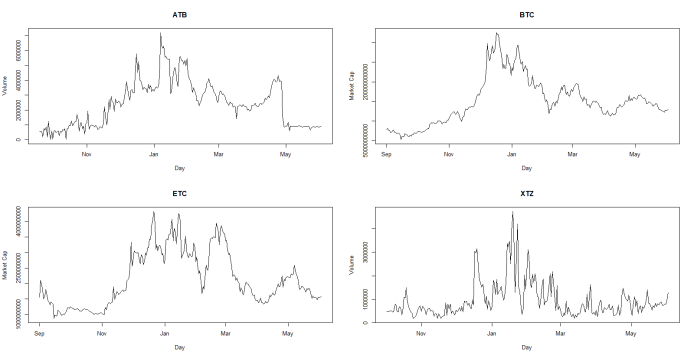 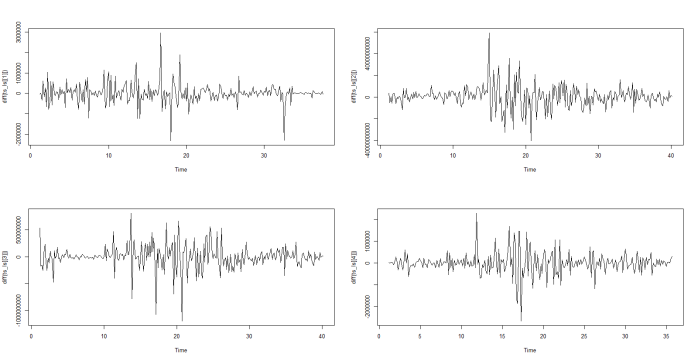 Understanding the problem with Non-Stationarity

Consider an example, where a retail store has a customer who purchases milk every day from the store. For the past 4 week he has been buying on a average 10 packs of milk with Monday and Tuesday being 15 packs each, Wednesday 12, Thursday 18, Friday and Saturday being 5 packs each and no purchase on Sunday. Even with a bit of variation to his daily purchases, there is a particular pattern as observed across 4 weeks and it is easy for the shopkeeper to estimate his needs and keep his share packed and ready for each day of the coming weeks.

Lately the customer has started to take on a average 25 packs, Monday and Wednesday being 25 and Tuesday being 40. Also, the amount of daily purchases are varying, some Tuesdays being 15 and some Mondays being 35, unlike before where it used to be the same for same days across weeks. The shopkeeper, would get his estimates wrong for some initial weeks basing his plan based on the past purchase pattern but would readjust his estimates based on the recent observations.

However, considering the entire milk purchase data of the customer the shopkeeper would feel less confident in wake of his recent changes in purchase. Also, given he doesn’t understand the reason for the change (which might have been he has set up a coffee shop or increase in his family size) he can only approximate and forecast for the future weeks, which if not entirely accurate, would be near about.

However, recently the customer has started to ask on a average 18 packs of milk. Shopkeeper will now have a hard time to estimate his weekly needs which has been changing over time and fluctuating a lot more. He would be very uncertain about the future needs of the customer.

This kind of data is known as non-stationary series and they are extremely hard to estimate accurately. Non-Stationarity is introduced due to some or other external events like market fluctuations, manufacturing plant closures, promotion and campaigns, increasing demand of the product, expansion to new markets etc. which needs to be accounted for in the model separately indicating occurrence of such event in the past and then in planned future to get an accurate forecast. Else, the model will assume the fluctuations as part of usual pattern and not as something caused by external events and carry the impact into the future, leading to spurious forecast. Stationarizing, smoothens the fluctuations resulting into more accurate and less erroneous future estimations.

1. Detrending the series: to handle deterministic trend in the data

2. Deseasonalizing the series: to handle deterministic seasonality in the data

3. Differencing the series: to smoothen the random fluctuations and presence of unit root in the data

4. Log transforming the series: to smoothen variation in the data

Each of these techniques smoothens the data of extreme changes that are caused by external factors (as in our example it could be increase in family size or starting of a coffee cafe) which could have an increase/decrease in the trend over time. Forecasting on such a volatile information will yield a less accurate forecast due to spurious understanding of the buying patterns without indication of what caused the change in the buying requirements. But before selecting proper techniques for stationarizing we need to understand various forms of non-stationarity in the data.

Non-Stationarity can be due to many different forms: presence of unit root, changing variance, level shifts, seasonality etc. However, certain forms of non-stationarity usually seen are:

when a=1, i.e the data is known to possess unit root and the equation turns out to be

What it essentially means is the time series model will be very susceptible to the shocks in the data and will continue to carry the effect of the shocks into the future without converging back to the long term mean or average trendline of the series (i.e. the series will not be mean reverting). This results into spurious and unreliable forecast. Due to summing up of the random terms ( e(t) + e(t-1) + e(t-2) ), the series accumulates error component (randomness) which keeps on adding up as length of the series increases.

Solution for stationarizing: Differencing the series

Solution for stationarizing: Detrending the series

When the series is observed to to be highly seasonal and constant across different cycles (year , if monthly data). However, seasonal time series models (seasonal Arima, holt winters etc.) are able to account for seasonality and forecast. But highly varying seasonality over time causes wrong assumption of seasonal volumes. So it is always better to deseasonalize and forecast and reseasonalize the series back when there is an determinable seasonality present in the data.

How to check if my data is Non-Stationary?

Graphs visualize a lot more information in quick and simple manner and are easy to interpret and understand.

Plot a run sequence plot (plotting forecast variable across sequence of time) to observe any indication of presence of trend, seasonality and varying variance

ACF plots shows auto correlation at different lags. For Non-Stationary Series, ACF plot can be seen to decay quite slowly and gradually and be well above significance levels, while for stationary series it would sharply decay. 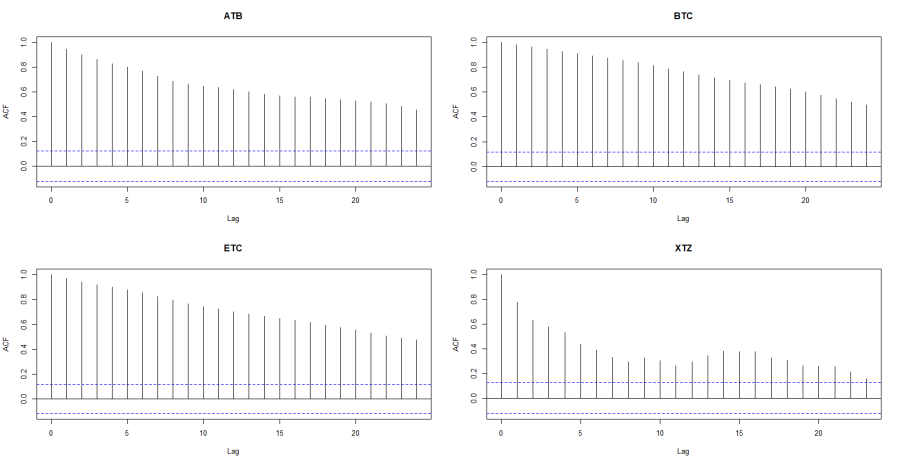 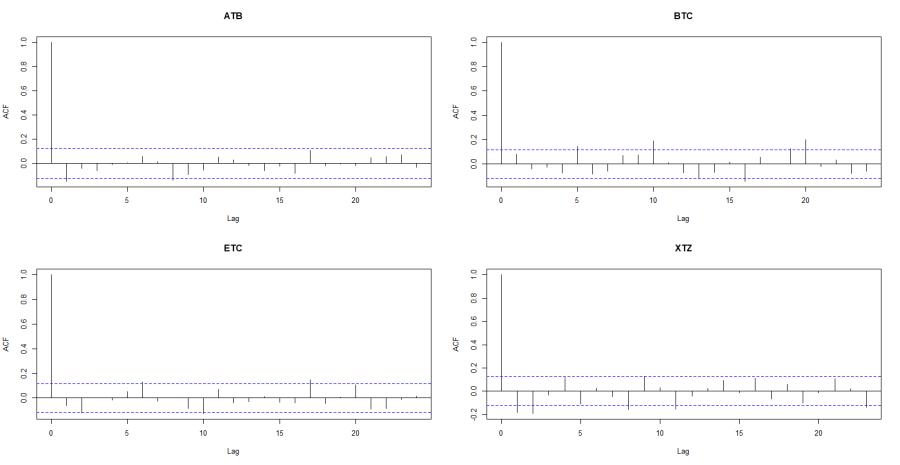 3. Statistical Tests: There are some statistical tests to indicate presence of unit root causing non-stationarity in the series which otherwise can’t be confirmed by graphical or summary statistics.

The below ADF test are done for the non-stationary and stationarized series shown above.

The below KPSS test are done for the non-stationary and stationarized series shown above.

How does forecast vary on Non-Stationary and Stationarized series?

Below graphs shows a very simple forecast, which definitely can be improved, but given the goal of the article is to focus on non-stationarity and not on forecast. What is to be focused upon is the level at which the non-stationary and stationrized data generates the forecast. In Non-stationary data we see the level at which the forecast is being generated has some influence of the past shocks or fluctuations. While stationarized series is more resistant to the same. 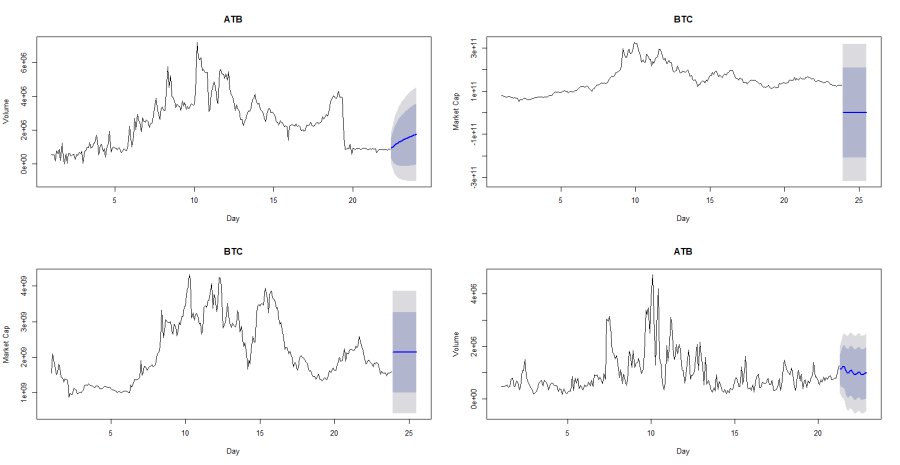 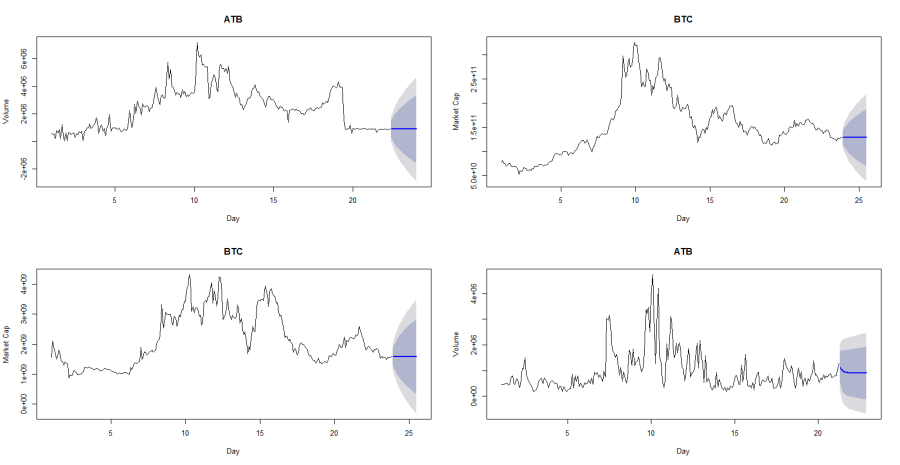 Non-Stationarity is an important step in time series forecasting and it has a huge impact on the accuracy and stability of the model. Not many people understands the concept of non-stationarity, not atleast completely leading to sub-optimal model development. However, once the idea behind non-stationarity and its impact on modelling is well understood it becomes quite a bit easier to explore the non-stationary concept and certainly develop a better model.

7 thoughts on “Why Non-Stationarity shouldn’t be ignored in Time Series Forecasting?”

Rain time is quite an interesting phenomenon. While sometimes it's is gradual but other time it just so swift. How the sky darkens up at a blink, the smell and touch of wind changing. Its this emotion that makes up to grab a cup of coffee, place and chair in balcony and experience it first hand. It just never gets old and never ceases making me happy.
I so like this view. With a park spread over a huge space and artificial lake in the midst of tall raised buildings all around. The view of the sky stretching tower in the front mesmerizing with it's artictural brilliance. The wind carrying the music from the water fountain beside, the lush green grass and the shade of nature all around.
Skyline
Borra caves,a famous tourist destination in Aruku Valley is one of the longest and deepest cave in the country. If one one hand it a geological marvel. For folks with no academic interest it's a visual spectacle. The lightings placed inside illuminates the cave extravagantly. It was like being in one of the climatic scenes of a treasure hunt movies (ohh!! yes, ones like Indian Jones, tomb raider). No doubt it's also happens to be one of the famous movie shooting destination.
Nature's prortrait of evening sky
One of the yummiest fish I have ever had. It was soo soft, perfectly spiced up and so tasty than I would have expected. Well!!, I was also equally way too hungry and when hungry food attends to tasty extra yummy. But from a thrid person opinion as well it was really good and if you are in Bhavani Island this is a must try in your lunch mean
Mahabalipuram is known for it's sculptures and to which, seas shore temple is a prime example, the monolithic structure carved out of same rock. The essense of the place can be found to be prevaliant even today from the many shops that line up the sea shore temple entrance.
Loading Comments...
%d bloggers like this: